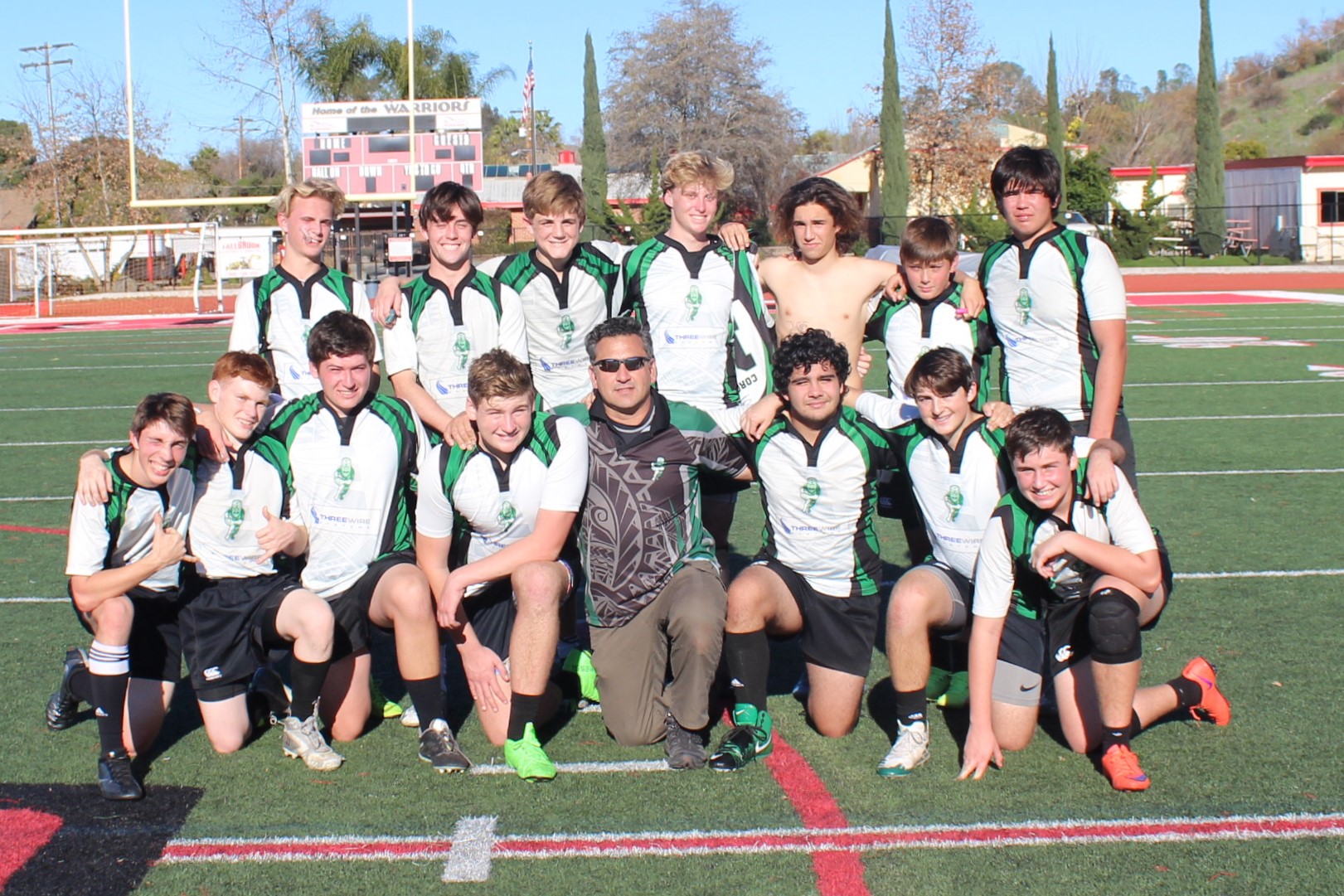 All of Coronado’s rugby teams won on Saturday including their COED under-12 team who beat the top ranked San Diego Mustangs and the High School Girls who won all three of their matches. They’re teams practice together so it’s no wonder that they shared in the good fortune. The High School Boys were focused on continuing their winning streak against Fallbrook, a perennial rugby powerhouse in Southern California. The match started on a good note with Fallbrook giving up a scrum penalty on the initial kickoff. AJ Sablan, the team’s starting Scrum-Half, and Paul Fieweger would work together to take advantage of good field position. AJ fed the ball into a scrum and then Paul exploited the weak side running in the first Try of the match. Juleon Weimann would complete the conversion from the far-right edge of the field making the score 7-0. Fallbrook quickly struck back with a forced turnover, some hard running and some not so great tackling by Coronado. Fallbrook would score and completed their conversion making the score 7-7.

Coronado dominated the scrums today behind their Props Cole Ackerly, Connor Bernard and Payton Williams. Coronado’s Coach Trujillo was often heard yelling “duck butts and 120’s gentlemen” which is code for remember your good body position in the scrum. They must have heard him because Fallbrook was constantly getting push back throughout the day. Mitchell Crowe, who normally plays with the Forwards, had to fill in as Outside Center playing with backs. His first run of the day would come after the ball rolled free from a ruck where Mitchell quickly picked it up and raced down the field. Some Fallbrook defenders would eventually catch up, but he was able to give a nice off-load to Teddy Hedrickson, who ran for another 30 meters. Paul Fieweger and Declan Homan would combine with a couple hard runs moving the ball further and right near the Try Line. Unfortunately, Coronado would concede a penalty giving Fallbrook the ball back taking away a lot of Coronado’s momentum. Paul and Asa Valdivia would combine for many hard runs as possession went back and forth, but Fallbrook would eventually score again making it 7-12. Coronado powered back taking advantage of a Fallbrook penalty. The ensuing line-out would go outside to Joe Williamson who split the defense and in for the go ahead try. Coronado led at the half 14-12.

Unfortunately, Coronado would make a handling error on the initial kick off receive giving Fallbrook an easy Try. The errors wouldn’t end there, Fallbrook quickly took the ball down field and in for another score. After a great first half Coronado suddenly found themselves behind 14-22. After taking a short nap on defense Coronado began to step-up with a swarming defense and some hard running. John Cook, an Outside Center, gave his best imitation of a runaway train fending off tacklers while streaking down the sidelines. The Fallbrook’s defense couldn’t contain John forever and he would eventually get his first Try of the season. Juleon’s conversion would be good and Coronado was back in the match, down just one point 21-22. With ten minutes remaining Bobby Zajonc broke off a series of long runs putting Coronado in scoring position again. Coronado would have the scrum near Fallbrooks Try zone on the far-left side of the pitch. Juleon Weimann had taken over as Scrum Half earlier in the match and he was now shredding Fallbrook’s defense with many quick runs off the back of the ruck. This was a critical moment in the match and Nick Penny, the teams Hooker, and the rest of Forwards needed to win this scrum. Crouch-bind-set was given by the referee and then Coronado drove Fallbrook backwards giving Juleon an opportunity to pick up the ball and run it in for the go ahead Try. The score was now 26-22 with a little more than five minutes remaining in the match.

Coronado’s defense would take over containing Fallbrook to their side of the field. Teddy Hendrickson would put the match out reach with another Try and Juleon conversion making the final 33-22. Fallbrook was everything that we expected with lots of skilled players and tons of power running. We fought hard and didn’t crumble under pressure which says a lot about our players. They will be away next Saturday against Mira Costa High School with a 5:30 PM kick off. Thank you for your support and we’ll see you on the pitch.